6 Reasons Why Las Vegas is A Global Business Leader 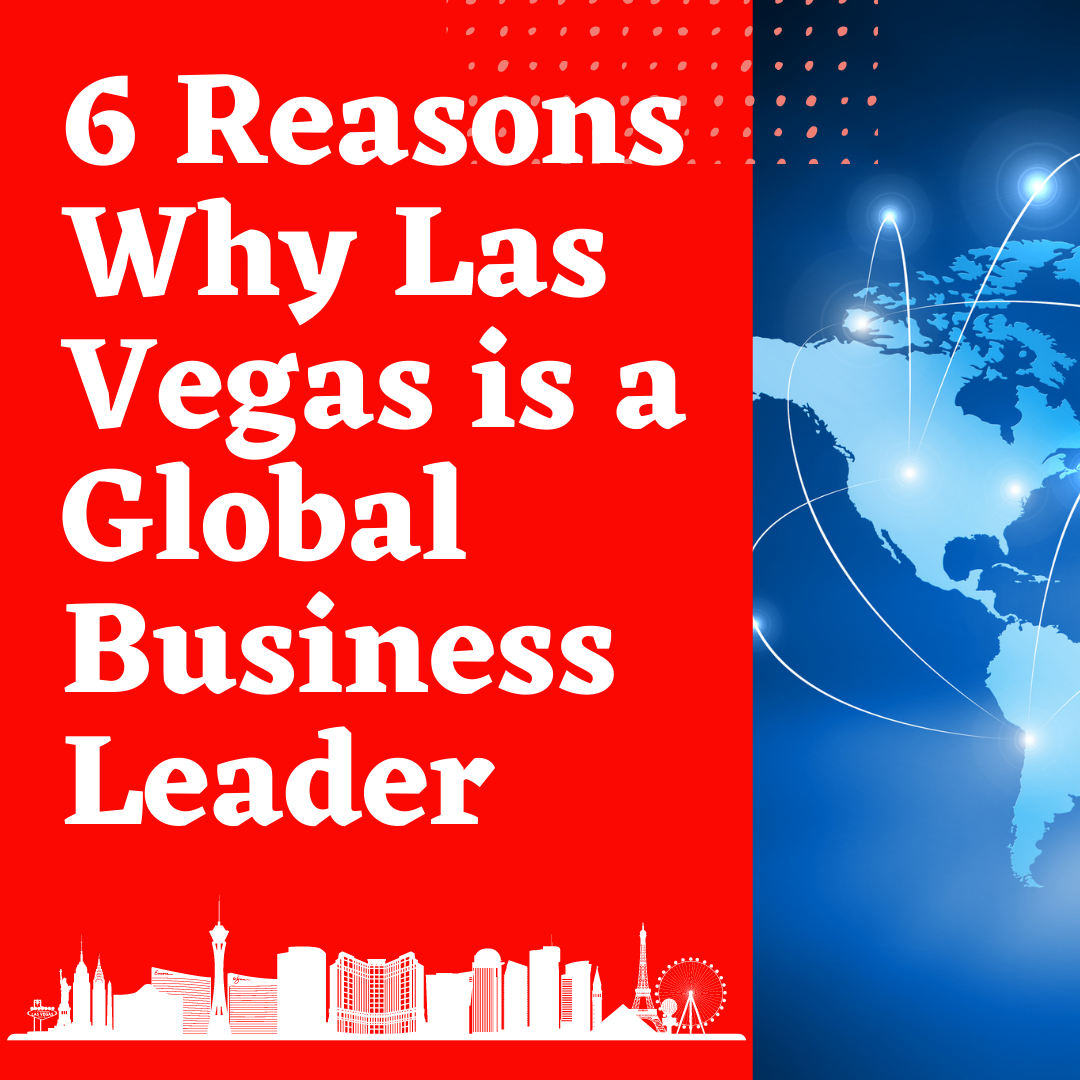 Las Vegas is well known for partying, gambling, and adult indulgence. Las Vegas has amazing nightlife, world-famous cuisines and chefs, iconic architecture, premier shopping spots, and amazing golf courses; but let us not forget gambling, weddings, and outdoor adventures.  While Las Vegas may be lesser known for its large role in business and industry across the nation, it is a global leader amongst the competition. Find out what Las Vegas does better than most in the business world and where it's headed.

The city is host to a wide variety of conventions, businesses, and industry leaders. Las Vegas hosted over 21,000 conventions bringing 6.3 million convention delegates in 2016. 6.3M visitors equated to $440M in Public Revenue to our city. Las Vegas hosted a total of 42.9M visitors in 2016, bringing a total of 2.1B in Revenue. International visitors represent approximately 1 in 6 travelers arriving in Southern Nevada for either business or pleasure. International visitors spend significantly more per visit than the average visitor they account for nearly 31% of non-gaming visitor spending.

The City of Las Vegas has nearly 150,000 hotel rooms to accommodate such a volume of visitors and offers hotels for every kind of budget with nearly limitless amenities. The average occupancy rate is 90% citywide. Las Vegas is also becoming known for being innovative and environmentally conscious. The City of Las Vegas’s Government building is powered by 100% renewable energy and saves an estimated $5 Million annually, and many of the five-star resorts along the Las Vegas Strip are LEED Certified (Green). Las Vegas is a trendsetter and pioneer in Global Climate and footprint impacts.

Las Vegas is, by all means, a destination, something extraordinary and fun, a kid in a candy shop, but for adults. Definitely a world leader in the arena of destination marketing, according to the Las Vegas Convention and Visitors Authority. Las Vegas is marketable to every locale and has a slogan and moniker that is unforgettable. Sin City, and What Happens in Vegas, Stays in Vegas. Las Vegas embraces its branding and takes its marketing to the next level.  Las Vegas is now home to the Vegas Golden Knights, part of the NHL, and the Las Vegas Raiders, a team in the NFL previously known as the Oakland Raiders, and as well the newest owners of the WNBA. This opportunity brings so much to the Las Vegas Valley. New residents, new jobs, and Las Vegas natives grow up with an aspiration to play for their hometown team.

Las Vegas has a global market of its own brewing, Las Vegas is very diverse, and noted to the Brookings Institute Among major metropolitan areas, Las Vegas registers the lowest level of segregation, at 40. Las Vegas experienced marked gains in its black and other minority populations over the years. To read more on this article by Brookings Institute click here. Las Vegas is beginning to be the new hometown for business and industry. Las Vegas is home to SWITCH, a world leader in data and server management. Marvel, Zappos, Tivo, DreamWorks, Ebay, Shutterfly, Intuit, HP, Intel, JP Morgan Chase, FujiFilm, Hulu, Boeing, and more national brands, are just a hand full of their clients. Amazon already has a fulfillment center in Las Vegas and is building a new 800,000+ square foot facility, bringing 30,000 employees to its warehouse. That is a substantial employment opportunity for Las Vegas Residents. Just outside of Las Vegas, a 20-minutes drive from the Strip is the future home of Faraday Future. They plan on breaking ground for an electric car manufacturing plant this year. According to the RJ as “the company has set a goal of building cars as early as 2017 and hiring 4,500 employees with an average wage of $22 an hour as part of the deal.”

The T-Mobile Arena boasts seating for up to 20,000 for live events. The Raider Stadium is boasting in pre-construction plans of an estimated seat capacity of 65,000. This means you could seat the entire town of Palm Springs, CA (44,552 US Census) and Agoura Hills CA (20,330 US Census), AND still have nearly 120 seats left over.  Removing all the amazing things we discussed in Las Vegas, you are still missing a component called accessibility. Las Vegas is a quick trip (estimating 4 hours driving) from other Metropolitan areas such as; Phoenix, Los Angeles, and San Diego, or slightly further (estimating 9-12 driving) from Denver, CO, San Francisco, CA, and El Paso, TX. Las Vegas has an international airport and three smaller airports servicing Henderson, Boulder, and North Las Vegas.

For all these reasons, Las Vegas has its stake in the business world and is a complete destination and booming growth town. Las Vegas is on its way to becoming a Sports & Technology Mecca.